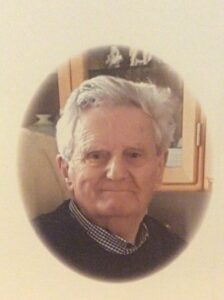 Well known local Theale resident, Brian Jackson died recently with his funeral taking place on Monday 15 February.  Bob Drew delivered his eulogy and we thought you might like to know more about him:

“I have been asked by Pat, Jamie, Alex, Andrew, Ann and Grandchildren Jonathan and Sarah to give this tribute to Brian.

Brian came to Theale 42 years ago with Pat and two young boys Jamie and Alex. He loved this village straight away.  Brian began life in Chadderton near Manchester where he was recognized as a very bright chap having passed his 11+ and entered Chadderton Grammar School at the age of 9. In the third year Brian met Ken Wright and they became friends  making and selling bracelets until every girl in the school was equipped! They went on to repairing broken electrical goods and vacuum cleaners. At 14 Brian built a two way radio which allowed him to communicate to his friend Ken 3/4 mile away which was quite illegal. Before he left school he built from scratch a television set using war surplus parts just in time for the 1949 FA Cup. (The 1st television in Oldham the press reported). He was also mad keen on cycling and with his pal Ken cycled around the north of Scotland in two weeks. 750 miles!

Academically he sailed through exams and in the upper sixth got a state scholarship at 17 to Manchester University to study physics, engineering and maths gaining a first in one of these subjects. Later Brian volunteered at Jodrell Bank to help build the worlds first radar to bounce signals off the moon to measure its distance accurately.

After the cycling he and his pal Ken moved on to an old car and toured the south coast with their girlfriends later their wives . Then Ken went off to do his national service and Brian to his secret career.

A job became available at EMI Wells with a house, and so began his long career with this company. Eventually he was known as ‘the top man’ in his large laboratory and his colleagues were & still are, very aware of the technical and business contributions he made, not only to the company but to the country. In his later years when he retired as Chief Scientist he was proud to be a Fellow of the Institute of Engineering and Technology.

Brian was interested in so many things as well as people.  Friends from near and abroad would ask for advice for all things technical as he could usually solve some problem.

Leaving EMI he became a parish councilor, chairman of Theale Flower Show and helping put together the Theale Millennium book. He had a lot of fun with Theale players pantomimeHe played a bit part play singing a George Formby song with Bill Woodroffe on the ukulele.  Being retired meant new hobbies arose in wood,  making grandfather clocks which meant building a large shed at the bottom of the garden. Caravan touring played a large part of Brian’s life with Pat,  plus many trips abroad to far reaching places like Alaska and to Australia.

So many people have their own stories how he has touched their lives and we shall always remember what a good father and best husband He was with his kindness, warmth, goodness and charm”

Here to help in Theale during the COVID 19 crisis - call at any reasonable time:

Sign up for our monthly
Theale Village Events Newsletter!